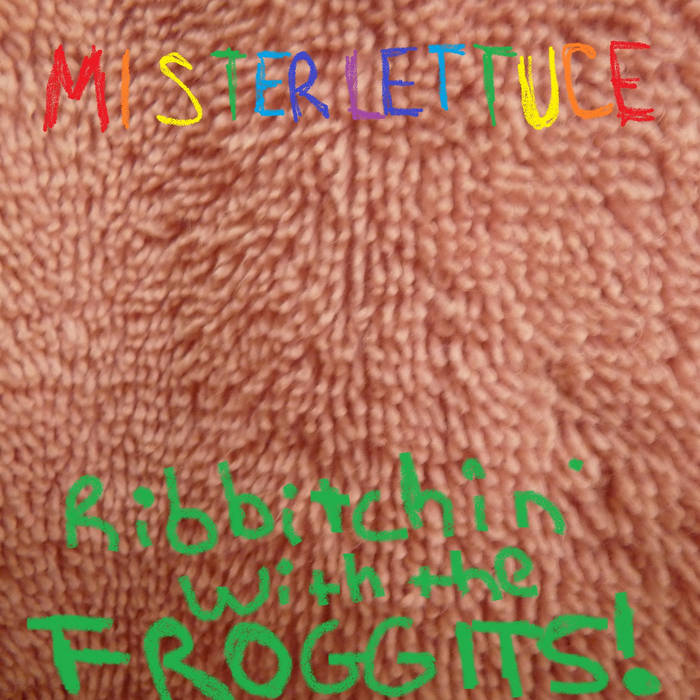 Half of these songs were recorded late 2016, and the rest were recorded around March 2017 at The Dill Dough Bakery (the best bakery on the planet!). Front and back covers by Mister Lettuce. Don't forget to ribbit.

Mister Lettuce made up most of this crap on the spot, but he did parody a few things, like I've Been Working on the Railroad, the 9 To 5 theme (Dolly Parton rules!), and that fucking "Greatest American Hero" theme (whoooooooo could it beeeeeeeeeeeee?). Mister Lettuce doesn't know why he does this.

Mister Lettuce likes bubble baths. Some people consider Batman to be their favorite super hero, yet others like Superman, Deadpool, The Seventh Doctor, and many others, but Mister Lettuce thinks that Mister Bubbles is the greatest superhero in his bathtub. Mmmmmm, bubbles. Mister Lettuce also likes The Bastards of Fate, who have had a really amazing record come out recently. It's really good, and it's called Suck The Light Out. You should buy it. It's much better than this crap. Trust me on this. Also, Mister Lettuce is really excited about Tunabunny's new album that should be coming out sometime this year. It's going to be really good.

All rights reserved and stuff, 2017 Mister Lettuce. If you paid money for this album, you rock! I probably used that money on a bag of potato chips, because I really like potato chips. If you didn't pay anything for this album, I can't blame you. This album is a bit too weird, don't you think? Actually, I really like that song about the beer and cow pasture and mushrooms and shit. The weird little noises that I made for the music sounded really cool to my ears, and I hope to do more sounds like that on future albums!

Dear listener, I really do hope that you enjoyed this album. All of you folks who follow what I do make things fun. I hope that all of you are having a great 2017 so far, and I hope that 2017 continues to be a good year for y'all. If 2017 isn't being good to you, I really hope that things turn around, because you rock and you deserve the best year that you can get!!! Seriously, you're great, and I thank you for checking my crappy music out!

This guy would like to say that he has never met a beer that he didn't like... but then he remembered that IPA beers exist. Yuck!

Bandcamp Daily  your guide to the world of Bandcamp